Joined 4 mo ago
·
3 Posts
I have searched all the related results for backup camera installations on this forum, but could not find the answer to my particular issue for my particular vehicle. It seems like there is significant variation among model years and even among countries of manufacture. I'm not posting here without having searched and thoroughly read what I could find elsewhere on this site. Any help would be appreciated.

Purchased a used 2015 3 sport HB (no Bose, but yes Infotainment).
Purchased the OEM camera (BHN9-67-RC0A) -- it fits perfectly into the hole intended for it.
It came with a 4-wire connector (red, yellow, green, black) -- see photo of the end of the camera cable below.


Many of the forums suggested that 'the wiring is all there -- just need to splice into it.' Following these forums, I purchased a replacement OEM wiring harness BJS9-67-060(3) that is supposed to include a split off for the backup camera (see photo). Confirmed it was for a 2015 Mazda 3 sport hatchback.


The new wiring harness does not match connectors above the hinge of the hatch where it is supposed to connect. First photo: the end of the replacement wiring harness; Next photo: my choices for where to connect it to the existing vehicle wiring, just above the hinge for the hatch. In fact, it's even male where it needs to be female to match up with the existing connector.


I cannot find a wiring diagram here or anywhere online for the 2015 Mazda 3 Sport HB. Does anyone have any experience with this particular vehicle, its wiring, and the OEM backup camera?
Thanks for any help you can provide.
T

Joined Jun 22, 2012
·
1,292 Posts
It would have been way easier had you just gone aftermarket. Probably cheaper, too. There are aftermarket cams that physically mount and look identical to the OEM cam, but because they are universal, are much easier to wire up. I've put ones on both my CX-5 and Mazda5, and they are all but indistinguishable from the factory cams. $25!

They interfaced seamlessly with my Kenwood stereos, too. 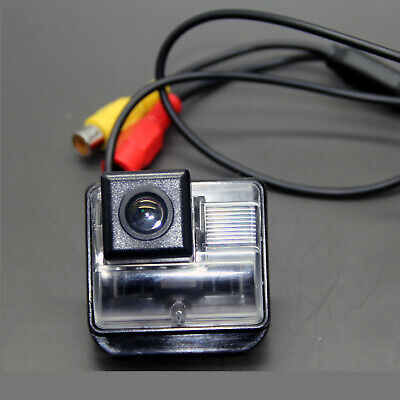 Joined 4 mo ago
·
3 Posts
UPDATE TO ORIGINAL POST: FACTORY WIRING FOR BACKUP CAMERA
I've continued my research and discovered a bit more information. Cobbling together information from other forums, I found a way (I think) to determine if the car came factory wired for a camera. Once you locate the biggest connector (the larger of the two side-by-side connectors in the photo below) beneath the plastic panels under the hatch, you can compare the upstream/downstream wiring. I think it is a CET2066 connector, at least it looks like the one on ConnectorExperts.com.

Downstream (see below): The wires coming out to the left of the connector would lead to the backup camera if one had been factory installed. You can tell that my vehicle was not equipped with a factory camera because on the downstream side of this C16 connector, those four camera wires are ABSENT from the connector (see photo below). The four empty spaces are labeled.

Upstream (see below): The wires coming into the right-hand side of the connector come from further up in the car, however, don't match up perfectly. There are four EXTRA wires on the upstream side of the connector. If these wires are present, the vehicle is factory WIRED for a camera but no camera was installed. They are the 6V feed for a camera, and the video feed for the camera (and corresponding grounds) as in the photo below.

So in my case, I don't need to run wires all the way up to the front of the vehicle into the rear of the infotainment unit. I just need to tap into these four wires and connect them to my OEM backup camera. My vehicle is factory wired for a camera, but didn't come with the camera itself installed. Sweet.


OPTIONS FOR WIRING THE CAMERA

1. ADD MALE PINS TO THE CONNECTOR
I've ordered a set of assorted automotive electrical connector pins from Amazon, hoping some of them will fit this connector. I can take the wires from the camera itself, attach these pins to the ends, and drop them into the correct empty spaces in the CET2066 above, and presto, I have a backup camera.

2. BUY A JUMPER CABLE
I found a jumper cable from AliExpress that has the same CET2066 connector. It has straight pass through for 16 of the 20 wires, and extracts the four wires for the camera and 6V power. Even if the extracted wires are from the wrong terminals, I can rewire the jumper. Then it's just inserting it between the two ends of the Mazda's connector, and I have my wires. It's $16.05 US at time of posting. I have ordered it. From China. We'll see if it ever gets here.

3. CUT THE FACTORY WIRING AND SPLICE
The last resort will be to cut the four camera-related wires just upstream of the CET2066 connector, and splice them directly to the backup camera wiring. I hate to cut factory wires. So this is a last resort. And if I do, I'll still probably add a connector between the camera and these factory wires so I can remove the camera if it ever needs to be replaced. But it's an option.


I'll update again when my connector pins arrive from Amazon.
U

Joined 4 mo ago
·
3 Posts
CAMERA WIRING
I still need to know which colors do what on the camera I purchased. Turns out, NOT OEM. Master Tailgaters MC-M3H14OE. That's why is was so much cheaper! But I can't find a wiring diagram anywhere online for it. Has anyone tested it and figured out which wires do what? Red, Yellow, Black, Green? I'm going to have to cut the connector off the end of the wire and splice it directly...